This event has already taken place!

Prof. Judith Berman studies pathogenic yeasts, and their responses to antifungal drug stress. Her group addresses basic mechanisms of genome change that underlie rapid phenotypic responses to stress, including shifts in whole genome ploidy, aneuploidy, translocations and gene copy number. Her lab has studied chromosome components including centromeres, telomeres, origins of replication and repeated DNA regions. Their current work focuses on antifungal drug tolerance, a mechanism involving phenotypic heterogeneity, with the aim of understanding how genetically identical cells grow differently in response to drug stress. Judith Berman trained in yeast molecular biology as a graduate student with Ada Zamir at the Weizmann Institute of Science and as a post-doctoral fellow with Bik-kwoon Tye at Cornell University.  After over 25 years as a professor at the University of Minnesota, she moved to her lab to Tel Aviv University, in Israel in 2012, where she has been conducting ERC-funded research for over 8 years.

Prof. Tom Harrison is a Professor of Infectious Diseases and Medicine, Lead for the Centre for Global Health, and Deputy Director of the Institute for Infection and Immunity, at St Georges University of London, Infectious Diseases Consultant at St Georges Hospital, London, and Professor in Medical Mycology at the MRC Centre for Medical Mycology, University of Exeter. He trained in Infectious Diseases in London and Boston, USA, and leads a clinical and laboratory research programme on the prevention and treatment of cryptococcal meningitis with colleagues from the UK and across sites in Sub-Saharan Africa, which includes phase II and major phase III trials. He has served on the WHO, Infectious Diseases Society of America, and Southern African HIV Clinicians Society’s cryptococcal guidelines committees, on the MRC (UK) Infection and Immunity Board, and is a member of the WHO Expert Group on Fungal Pathogens and the Scientific Advisory Board of JPIAMR.

Dr. Tihana Bicanic joined St George’s University as a Senior Lecturer and Honorary Consultant in Infectious Diseases in April 2013. Prior to this she undertook her pre-clinical medical training at Cambridge and clinical training at Oxford. Her specialist postgraduate clinical training in Microbiology and Infectious diseases was at St George's Hospital NHS Trust (2002-2009), where she has been an Honorary Consultant in Infectious Diseases since 2013.  Since 2004, together with colleagues from the Cryptococcal Meningitis group at St George's, she has been involved in internationally-leading clinical and translational research in the field of cryptococcal meningitis in HIV. Since 2010, she has led her own laboratory and research group at St George’s. She was promoted to Reader in Infectious Diseases in October 2015.  Tihana was a co-founder of the Cryptococcal Meningitis advocacy group (CRYPTO-MAG) which is coordinated from St George's University and campaigns for access to medicines for cryptococcal meningitis. She has contributed to both South African and WHO cryptococcal treatment guidelines. She is the lead coordinator of the International Society for Human and Animal Mycology (ISHAM) working group on AIDS-related Mycoses. She is regularly invited to speak at major International Infectious Diseases and Mycology conferences (ID week, ECCMID, TIMM, ISHAM). She sits on the British Infection Association Scientific Advisory committee. In 2018, she was elected Fellow of the European Confederation of Medical Mycology (FECMM) in recognition of scientific excellence and outstanding expertise.

Dr. Elaine Bignell is an internationally recognised leader in the field of human fungal pathogen research and a Co-Director (Research) for the MRC Centre for Medical Mycology at the University of Exeter. Her work addresses the mechanistic basis of lung diseases caused by the major mould pathogen of humans, Aspergillus fumigatus.  She is a molecular geneticist by training and Elaine began her independent research career as an MRC New Investigator by securing a fast-track to Lectureship Award at Imperial College London. She later played a major role in establishing the Manchester Fungal Infection Group (MFIG) and in securing its success as a leading International Centre of Excellence for fungal diseases research, having served as a Director of this unit for 5 years (2015 – 2020). Elaine’s research seeks a mechanistic understanding of fungal lung disease with a view to developing novel diagnostics and antifungal therapies. Her approach integrates infection models which transcend multiple experimental scales to address disease outcomes at the molecular, cellular, tissue, organ and whole animal levels. Most recently, via iterative MRC funding awards, Elaine has applied a systems level approach to define pathogenicity in Aspergillus fumigatus, and is now developing inhibitors of fungal pH signalling as novel antifungal drugs, and studying secreted fungal proteins as novel vaccine candidates and diagnostic tools.

Prof. Dominique Sanglard is an Associate Professor at the University of Lausanne, Switzerland where he is the head of a research group in the institute of microbiology. His work deals with the response of fungal pathogens to antifungal drugs and also with the molecular understanding of the mechanisms leading to antifungal drug resistance. His research group investigates both pathogenic fungal species of Candida - C. albicans and C. glabrata in order to better understand the features that contribute to their virulence and resistance. For this purpose, advanced genetic and molecular tools are used as well as several animal models of infection. His research group is trying to identify novel antifungal agents from different sources and attempt to establish their activities directly in vivo using animal models of infection. Dominique has over 200 research publications.

Prof. Matthew Fisher is a Professor of Fungal Disease Epidemiology in the School of Public Health at the Imperial College London since 2013 and a Theme lead in the MRC Center for Global Infectious Disease Analysis since 2018.  Matthew works on emerging pathogenic fungi. His research uses an evolutionary framework to investigate the biological and environmental factors that are driving emerging fungal diseases across human, wildlife and plant species. Wildlife and their environments play a key role in the emergence of human emerging infectious disease (EID) by providing a 'zoonotic pool' from which previously unknown pathogens emerge. Conversely, human action impacts on patterns of fungal disease via the perturbation of natural systems, the introduction, and the spread of pathogenic fungi into naive environments, and by rapid natural selection for phenotypes such as resistance to antimicrobial drugs. These interactions are leading to an upswing of new fungal infections in new places, causing new (and exacerbating old) human diseases. Matthew Fisher’s research group is focused on research using genomic, epidemiological, ecological and experimental analysis to uncover the factors driving these EIDs, and to attempt to develop new methods of diagnosis and control.

Prof. Sarah Gurr holds the Chair in Food Security at Exeter University. She studied at Imperial College of Science, Technology and Medicine (BSc, ARCS, DIC and PhD (Plant Pathology)), where she was awarded The Huxley Medal for her outstanding record of achievement.  She was a post-doctoral Fellow in Fungal Biology at St Andrews University and thence an independent Royal Society University Research Fellow. She was appointed, firstly as Lecturer, then Reader and Professor at Oxford University (and Fellow of Somerville College), where she also held a Leverhulme Trust Royal Society Senior Research and a NESTA (Science, Technology and the Arts) Fellowship. She was a curator of the Oxford Botanic Garden for 21 years. Sarah was appointed to the Chair in Food Security, at Exeter University in 2013 and was Head of School (2015 - 2017). She was formerly President of The British Society of Plant Pathology (2011) and sat on Biotechnology and Biosciences Research Council UK (2012 - 2018). She was recently appointed to The International Advisory Board at SLU University, Uppsala (2019) and as Advisor to The Scottish Government on Plant Health (RESAS, 2017). Sarah held the Donder's Chair (Honorary) at Utrecht University (2016 - 2017), was appointed as Visiting Professor at Utrecht (2018 - 2022), and was awarded the President’s medal by the British Mycological Society in 2018. She became a Fellow of the Canadian Institute for Advanced Research (CIFAR) in 2019, Fellow of American Academy of Microbiology (2020), is Senior Research Fellow at Somerville College, Oxford and Fellow of The Royal Botanic Gardens, Kew and The James Hutton Institute, Dundee and awarded an Honorary Doctorate by SLU Uppsala (2020). Her interest is in plant disease - with particular emphasis on fungal infestations and in their global movement and control. Sarah has been invited to speak about this work in plenary and keynote conference lectures, at various Citizen Science gatherings and on national and international radio. She has authored or co-authored over 150 publications, including 11 high profile papers in Science, Nature and Nature Journals and a contribution to the Government Foresight report on “Biological Hazards”. In 2019, she was listed amongst the most highly cited researchers worldwide (Clarivate Analytics).

Dr. Sheppard is a Professor and Chairman of the McGill University Department Microbiology & Immunology, and Founding Director of the McGill Interdisciplinary Initiative in Infection and Immunity (MI4). He leads the Medical Mycology laboratory and practices clinical infectious diseases at the McGill University Health Centre where his primary area of interest is human fungal disease. Dr. Sheppard’s research interests focus on elucidating the mechanisms by which the fungal pathogen Aspergillus fumigatus causes human disease as a means to develop new therapeutics for these infections. He has published over 100 research papers and book chapters and has delivered over 150 invited lectures worldwide. Dr. Sheppard has been the recipient of numerous awards including a Clinician-Scientist award from the Canadian Institutes of Health Research and a Career Award in the Biomedical Sciences from the Burroughs Welcome Fund. He is an elected fellow of the American Society of Clinical Investigation and the American Academy of Microbiology. 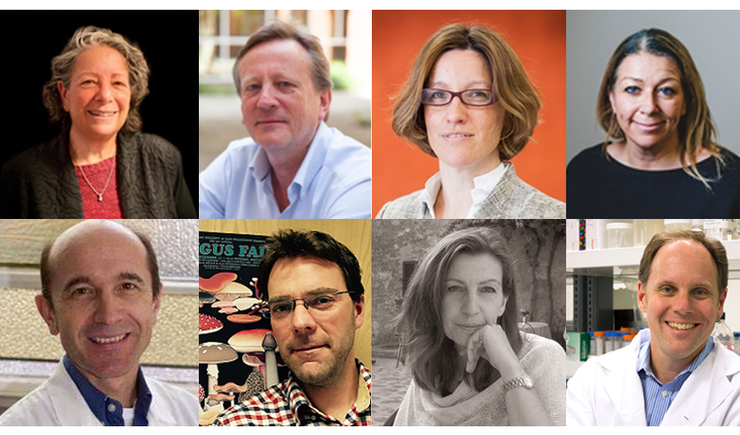 Contact and questions JPIAMR Secretariat
JPIAMR is using Invajo´s event tool for managing this event and its attendees. Invajo have no responsibility for the execution of the event. Any questions regarding the event and its content will be answered by JPIAMR. For technical questions, please contact Invajo´s support. Your details are handled by Invajo, JPIAMR and different subcontractors that are required for the delivery of the products and functions provided by Invajo. By going through with a booking on this event, you also accept Invajos general conditions which are available on www.invajo.com.
This site uses cookies as described in our Cookie Policy. To see what cookies we serve and set your own preferences, please use your web browser settings. Otherwise, if you agree to our use of cookies, please continue to use our site.